My research focuses on:

This project follows our long standing interest in the Pan-African evolution of the Arabian-Nubian Shield and the evolution of the Gondwana Supercontinent. The project was concluded in 2014 with more than 6 articles in top ranked journals. However, there are still data to be processed with other research groups (see major collaboration section). The project involved two PhD students and several MSc students.

This project treats the economic geology of the Arabian Nubian Shield with particular focus on mining concessions in Chad and Sudan of the Madrid based mining company SPmining. We focus on scientific work paralleling the exploration effort in these regions.

The Wadi Feiran migmatites in Sinai are the highest grade rocks found in Egypt, but their metamorphic evolution is barely know. With this project we studied the tectono-metamorphic evolution of the northern part of the Arabian-Nubian Shield. The project was concluded in 2010 with three articles.

Geological mapping and investigation of the mountain chain in Dronning Maud Land has been carried out by a number of geologists from South Africa, Japan, India, Germany, Russia and Norway over the last 40-50 years. The existing geological maps of Dronning Maud Land are, for a large part, based on fairly old data which makes these maps inhomogeneous. The maps are at different scales, contain different levels of details, and the standards for classification of the rock units may also differ between the maps. This limits the ability to use these map to draw an overview tectonic model of the evolution of Dronning Maud Land. This limitation is extended to understanding the evolution of the southern parts of the Gondwana supercontinent since the Dronning Maud Land is the southern geographical link between South Africa, Australia and Indian subcontinent. Moreover, the existing topographic dataset from Dronning Maud Land is based on fairly old topographic maps (1960s), and there is a discrepancy between the topographic dataset and the more recent Landsat images. As a result of the discrepancy between these datasets, some of the outcrops are not mapped at all. For all these reasons, a new geological map of the Dronning Maud Land, for the area between 20o W and 45o E, is being compiled to the scale 1:250 000 (11 sheets) at the Norwegian Polar Institute but in collaboration with other national and international institutes. The goal is to integrate existing maps into a new seamless, digital uniform geological GIS database. This new geological map will be a descriptive map based on the new topographic dataset of the Landsat 8.

The most significant contributions using cross-disciplinary approaches of metamorphic petrology, quantitative thermodynamic modeling, geochronology and structural geology have 1) clarified the petrogenesis, the exhumation mechanism and determined P-T-D-t paths of high-grade metamorphic rocks of the Arabian-Nubian Shield; 2) recognized high-grade metamorphic rocks of the northern part of the Arabian-Nubian Shield as metamorphic complexes, exhumed in oblique transpression setting during the Gondwana collision; 3) constrained the absolute age of shear zones activity of the largest Proterozoic shear zone on Earth (i.e. Ajjaj shear zone a branch of the Najd Fault System); 4) studied the P-T–D-t path and the age of crustal thickening during the collision of East and West Gondwana using Hafafit metamorphic complex, Egypt as a case study; 5) studied the multistage tectonism (i.e. metamorphism and deformation) during the Gondwana collision using Baladiyah Complex, Saudi Arabia as a case study; 6) identified a new type of metamorphic complexes (i.e. strike-slip complexes) in which the high-grade rocks exhumed due to activity of strike-slip shear zones; 7) studied the thermal effects during the break-up of Rodinia supercontinent; 8) developed a new geodynamic model for western Dronning Maud Land, Antarctica involving earliest Pan-African metamorphism in eastern H.U. Sverdrupjella terrane, followed by later diachronous tectonic accretion of the eastern H.U. Sverdrupjella arc segment onto the western H.U. Sverdrupjella crustal segment; and, 9) presented a new geodynamic model of Kromberg type-section, Paleoarchean Barberton Greenstone Belt, South Africa in which an inverted metamorphic field gradient is documented. 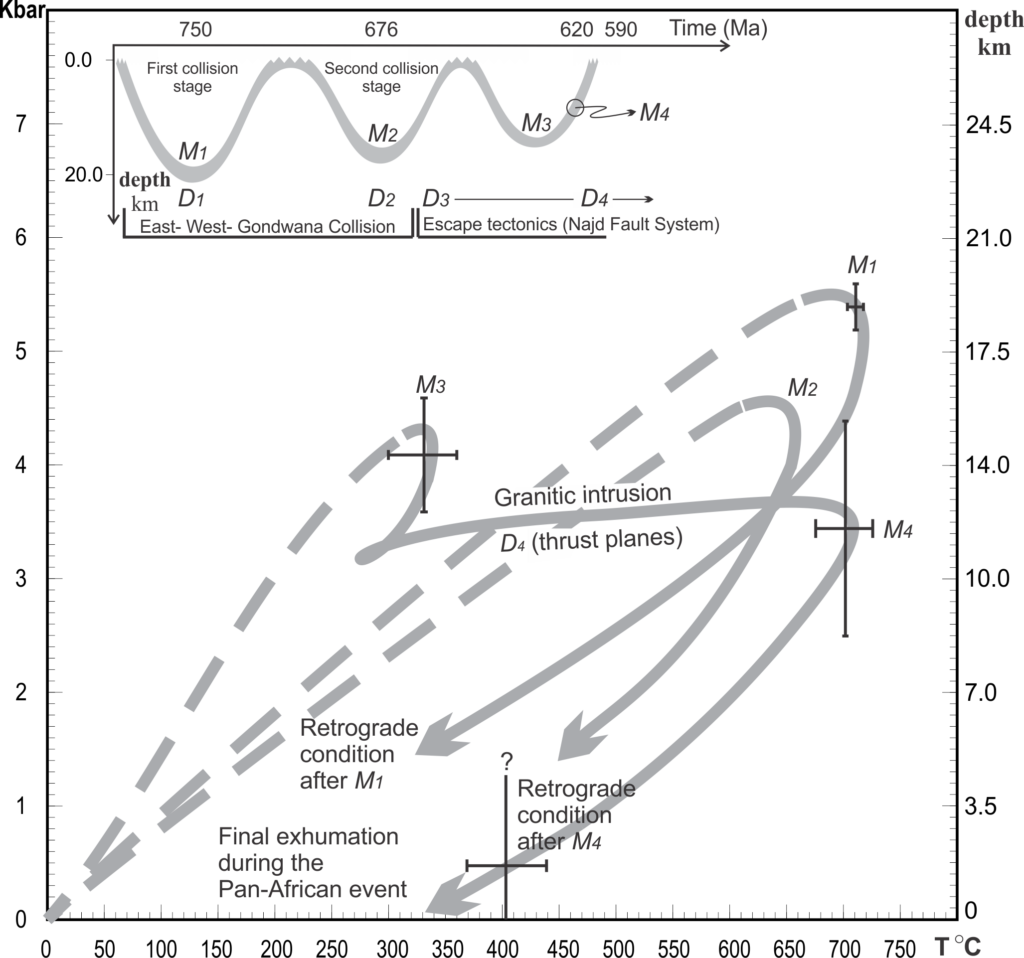 Summary of the P-T paths of high-grade, medium-grade and low-grade metamorphic rocks of the Arabian-Nubian Shield (NW Saudi Arabia). The thick arrows mark the P-T paths concluded from several P-T pseudosections while the dash arrows are suggested. The vertical and the horizontal bars are the average P and T. Note the final exhumation path terminated at temperature of about 400 oC but with uncertain pressure. The insert is a relation between the time and the depth of burial showing three cycles of exhumation and burial. The figure shows the evolution the supercontinent Gondwana and the collision history of the East- and the West Gondwana from ca. 750 Ma. to ca. 590 Ma. For more information please read Abu-Alam et al., 2014 (Journal of Petrology).

My contributions in studying the igneous systems have 1) established the inter-relationship between tectonics and magmatism of the Pan-African granitoids using examples from western Saudi Arabia; 2) studied mantle geodynamics and processes beneath the Arabian–Nubian Shield during the closing of the Mozambique Ocean using serpentinites from Eastern Desert, Egypt; 3) constrained the tectonic setting and the crustal depth in which the granitic rocks of southern Sinai were intruded; 4) studied the gneisses of the Cenozoic volcanism of western Saudi Arabia using Harrat Kishb as a case study; and, 5) established a genetic relationship among igneous rocks of Eastern Desert of Egypt using Wadi Kariem area as a case study.

Fluid-rock interaction can form ore deposits (e.g. gold deposits), new minerals that record the fluid evolution history of the rock or types of rocks which have an economic interest. My most significant contributions in the fluid-rock interaction have 1) showed that strain cap minerals need fluid infiltration processes in order to be formed after rocks achieve peak metamorphism; 2) demonstrated the role of fluid-rock interaction as a mechanisms of formation of Arabian-Nubian Shield serpentinite and calc-silicate rocks; and, 3) presented a new formation mechanism of gold ores of the Arabian-Nubian Shield (e.g., figure below), in which the gold-bearing fluids were generated due to metamorphic devolatilization processes across the greenshist-amphibolite facies transition of ophiolitic and metasedimentary source-rocks. 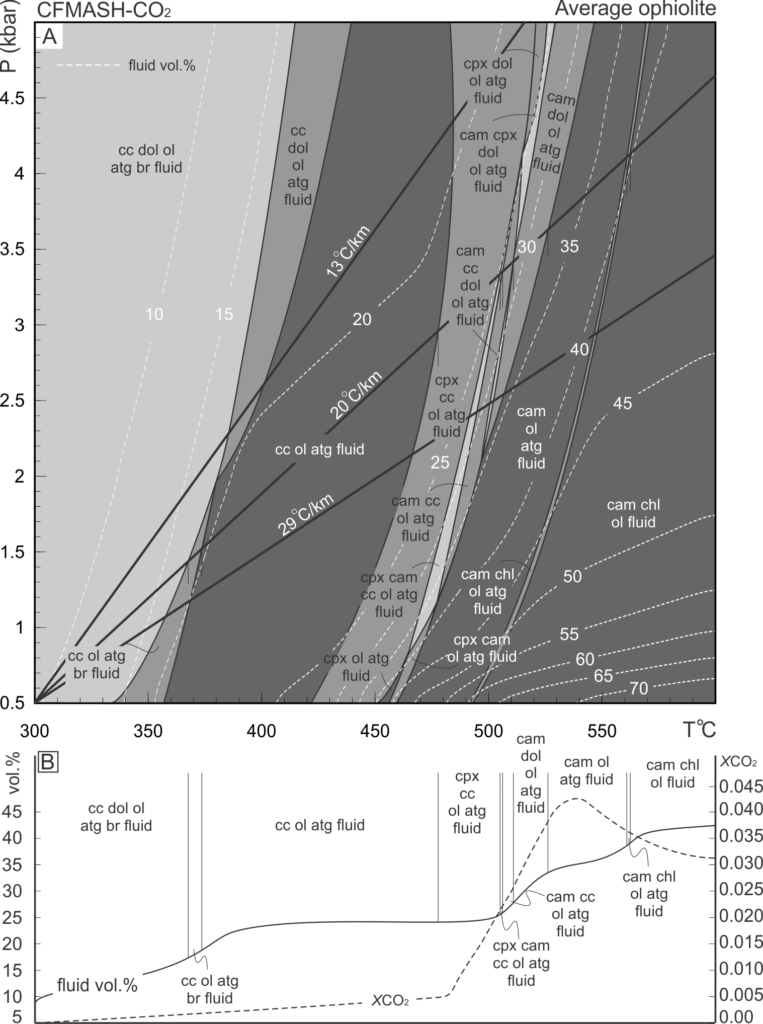 The amount and the composition of the fluid that will be released from ophiolitic rocks at the greenshist-amphibolite facies transition. a) P-T pseudosections in the CFMASH-CO2 chemical system of average ophiolitic composition showing the change in the mineral assemblages across the greenshist-amphibolite facies transition. b) A cross-section showing the amount (vol%) and the composition (XCO2) of the fluid that will be released from the rock. The cross-section was taken at P-T conditions equivalent to thermal gradient of 20 oC/km. The vertical lines are equivalent to the intersections between the different mineral assemblages and the geotherm. For more information please read Abu-Alam et al., 2018 (Journal of the Geological Society of London). 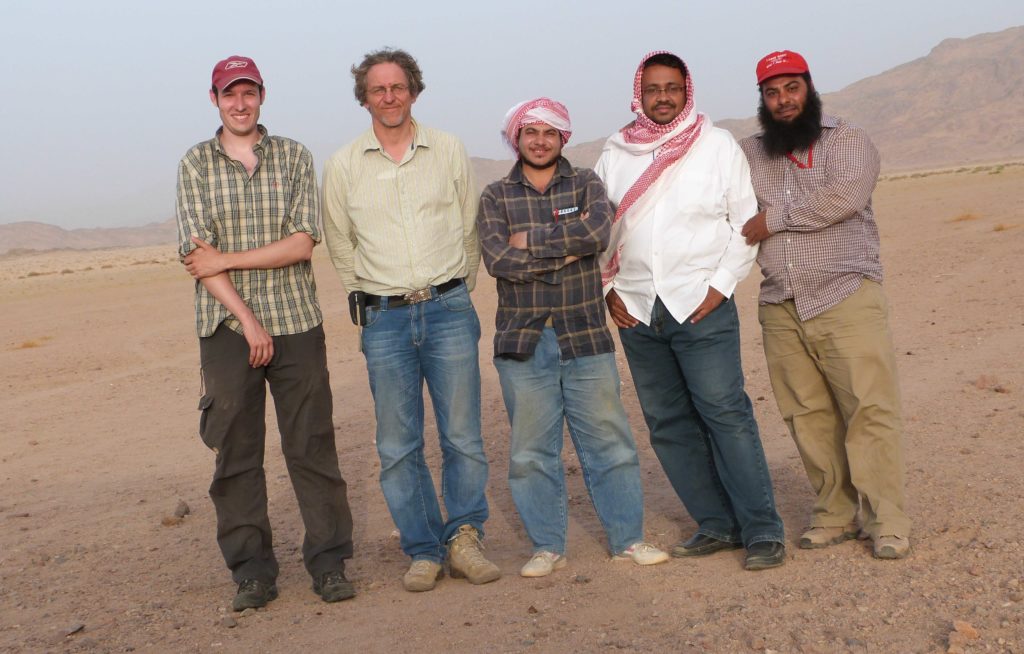